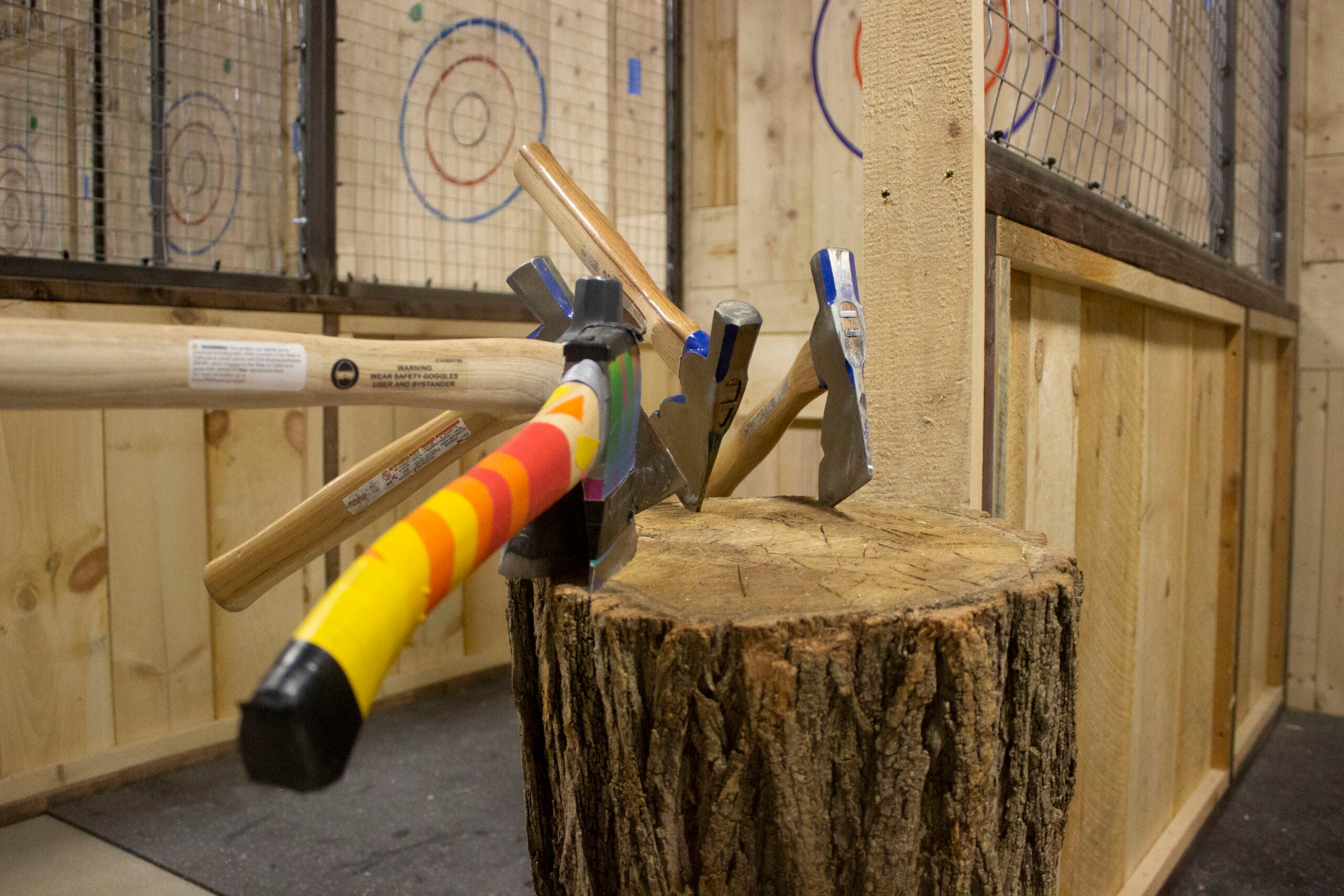 If there is one pro tip Chester Domoracki, the general manager of Revolution Axe in Everett would offer first-time visitors to the ax-throwing venue, it’s to remember that you aren’t hurling a baseball.

“Don’t try to throw it too hard,” he said. “It’s about technique and control.”

The other piece of advice? Don’t be afraid — and ignore that viral video of the ax bouncing back towards a woman. That situation was a fluke brought on by unsafe conditions.

As ax-throwing venues continue to pop up, fueled by the ongoing fascination by people of all ages to try the activity growing more popular each day due to social media tags and word of mouth, staff say they aren’t surprised it’s catching on.

It’s fun, it’s different and kind of edgy. It’s something anyone regardless of age or skill level can do. Coaches oversee the activity and provide instruction, advice, and supervision.

The activity, similar to darts, requires participants to throw the ax at a wooden target marked with a bullseye. Points are given based on where the ax lands.
The axes typically weigh about 1 ½ pounds.

“It doesn’t require athletic ability,” said Amanda Mann, the director of marketing for Wicked Axe. “The axes are not heavy so they are easy to throw.”

In fact, the average age of ax-throwing visitors to the Haverhill restaurant and bar is 35-to-50 years old, Mann said. Among the customers having the most fun are women in their 50s and 60s, she added, often while enjoying an espresso martini.

Danielle Palmer, director of operations for Urban Axes, said the activity is appealing as a date night, with groups of friends for an evening out, or as an idea for a birthday party, office holiday party, or a bachelor/bachelorette. And since it’s something most people have never tried, no one is particularly good at it the first time they do it.

“Everyone is coming in on the same playing field,” Palmer said.

While the Somerville location is among the smallest of the Urban Axes locations, it’s also the busiest, says Palmer.

“We see people from all walks of life,” she said.

Group events are available for 1 ½ to 2-hour sessions and must be booked in advance. Couples or small groups can book a social throwing session or walk in. Urban Axes offers alcohol and is 21+.

Crazy Axes is opening its second location at Patriot Place this fall, and also operates a mobile ax-throwing venue that can be booked for festivals and parties. They’ve even been booked for weddings, a trend that started when COVID precautions restricted dancing at receptions and couples wanted to offer guests something fun to do.

“It snowballed from there,” co-founder David Kulikowski said.

Crazy Axes allow kids 9 and older to throw while accompanied by an adult and under the supervision of a coach. Crazy Axes allows participants to bring in beer or wine and food.

Revolution Axe is owned by a group of locals who discovered the fun sport while on a trip to Canada. They opened in 2019.

“Ax-throwing is actually super accessible,” says Domoracki, noting that the venue has welcomed visitors with Parkinson’s and other ailments who are able to participate successfully.

Seeing their eyes light up when they connect with the board is immeasurably gratifying, Domoracki added.

Revolution Axe is 18-and-older. Food is allowed, and beer and wine are available for purchase. A mobile venue is also available for rent.

The restaurant and sports bar offers several other sources of entertainment — pool tables, ping pong, a golf simulator, board games — but the ax-throwing lanes are the biggest draw.

Mann, whose parents own the venue, remembers when she first tried the sport.

“I have no athletic skills whatsoever,” she said. She surprised herself by picking it up quickly.

While the venue is mostly 21+ (see the website for time and details), Sundays are Family Day and is open to 12+ from noon to 9 p.m.