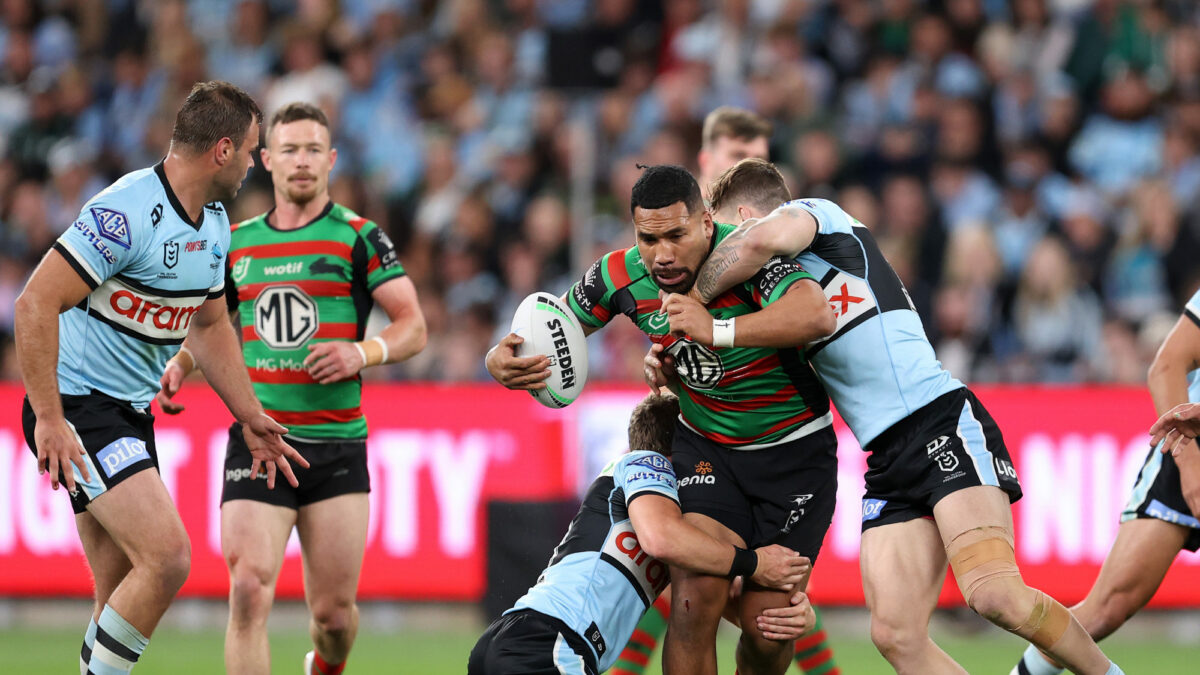 Souths smashed the Sharks in the end, with a combination of Cronulla errors and some real razzle dazzle able to deliver the Bunnies to a Preliminary Final meeting that seemed less than likely about half and hour into their devastating loss to St George Illawarra earlier in the year.

They might not get to play at Allianz Stadium next year as much as they would like, but after three weeks in a row at the new ground, they seem to like it. Next week at Homebush they’ll take on the Panthers and, by this point, it’s basically a free hit.

Glory, glory, then, and sorry to the Sharks who didn’t play as well as they can and were jumped by a well-oiled machine. They take the straight sets crown for this year. Let’s hear how it happened.

This is now the sixth game of the 2022 Finals Series and save for a twenty minute period on the opening night in Penrith, we’re yet to see a grind.

Cronulla and the Cowboys had a crack at it, but in the last ten minutes rather than the first, while Parramatta tried the same last night, only for the Raiders to disengage and let them run right over the top.

Maybe this is where we are in the NRL at the moment: the slow accumulation of fatigure and extended battle for position that used to define the games between the best is basically gone. I hold no great opinion as to whether that is a good thing or not, because tactics always evolve, as is natural.

What is clearly evident is that, the Panthers aside, teams aren’t that great at it anymore. Some, like Souths, don’t really engage with it anyway and won fairly comfortably with a completion rate in the 60s, because completions are junk and doing something with the ball matters.

The fear, generally, is that eventually a grinding team will win the competition because attritional, error-free football should win out in the end in a big game. Penrith, next week, will certainly hope that this is the case.

Reading the possession statistics on South Sydney games is fun. They will regularly lose possession counts, because they are calculated based on time in possession, but actually have more sets than their opposition.

This is because the Bunnies race through their work. They’re not really bothered about wearing the other side out with repeated bouts of effort, and instead look to challenge them through forwards who play up and down, allowing for the long shifts that are the trademark of their attack.

There’s an adage that you don’t need to try to score on every play, and Souths don’t, but they do try to score on almost every set. They’re not really here to play for position when their best players do their best work in broken field, so they try to create it as often as possible, even if that invites errors.

The first ten minutes were a good example of this: Souths had just 41% of the ball, but both sides had seven sets, seven chances to score. The Bunnies had made four errors, but had made far more of an effort to breach their opponents’ line, and indeed, were leading.

By half time, the time in possession had switched to a more even 53/47 split in Souths’ favour, and for that, they had managed more four more sets, more line breaks, more errors, more offloads and, of course, more tries.

After last week’s loss to Cronulla, I asked Craig Fitzgibbon in the press conference if he was worried that his side had conceded 30 points to the Cowboys, my contention being that teams that conceded 30 points rarely win many games in the finals. He didn’t seem concerned.

He probably should have been. The first half saw Souths go ahead on their first foray into Sharks territory – Mark Nicholls through poor central defence – then defend a series of tackles on their own line, then defend a prolonged period of pressure on their line, turning 20 tackles’ worth of good ball away.

When Souths got into Sharks territory, the resolve was rarely reciprocated. The tries for Nicholls and, especially, for Cam Murray late in the first half and Cody Walker midway through the second half, were entirely avoidable and spoke to the struggles in central D that Cronulla showed last week as well.

Souths are a very good attacking side and will throw a hell of a lot at you, but they can also defend hard on their own goalline.

The major two changes that took them from 8th to a preliminary final have been holding onto the ball better and a massive upswing in urgency in defence.

The Sharks have never really had that moment. Last week might have been it, but that’s pretty meaningless now. It’s be top of the list for the first day of training for 2023.

It’s all about cattle, right?

This was like an anti-grind, because neither team is a) good at grinding footy or b) interested in it. Not for no reason are these the top two for errors per game.

The style that Cronulla use, which involves their wingers playing towards the corner post and their backline spreading around the defence, is very effective when it works. Tonight, it rarely got the chance to get going.

Those two outs also greatly affected the Sharks’ ability to set start. Their back three are as good as any in that regard, pushing even the mighty Panthers for yardage metres, but with the men on deck tonight, that was never likely to win.

Again, Souths don’t lose much here because Alex Johnston is a finisher and not a yardage man, and neither really is Latrell Mitchell. They don’t engage in it in the same way.

Katoa and Talakai, allied with Ronaldo Mulitalo and Jesse Ramien, allow the Sharks to set the tone, keep their agile pack fresh for lung-busting efforts in supports and decoys and get them up the park. Lachie Miller and Connor Tracey are perfectly fine footy players, but that’s not their game and the Sharks missed it.

Speaking of men who were missed: Campbell Graham. When Souths had a little wobble this year, you could put a lot of it down to the loss of three blokes: Latrell Mitchell and Cam Murray, of course, but also Graham, who is so vital to the defensive solidity of his edge and to his side’s ability to shift fast through hands. He was absent between Round 16 and Round 23, but has timed his return perfectly.

A word, too, for Junior Tatola. There’s not been much love for the big man – not even the ironic love that Mark Nicholls gets – but he was superb, pushing 200m with ball in hand and picking up enormous slack when Siliva Havili went down injured and extra midfield minutes were needed. Indeed, his whole performance was designed to take up the role that Tom Burgess usually fills, and he did that superbly.

Souths thrive because they have plenty of honest, up and down forwards who don’t complicate things too much in the middle. Head down, arse up, on your front and Damien Cook dash out our fling the ball wide.