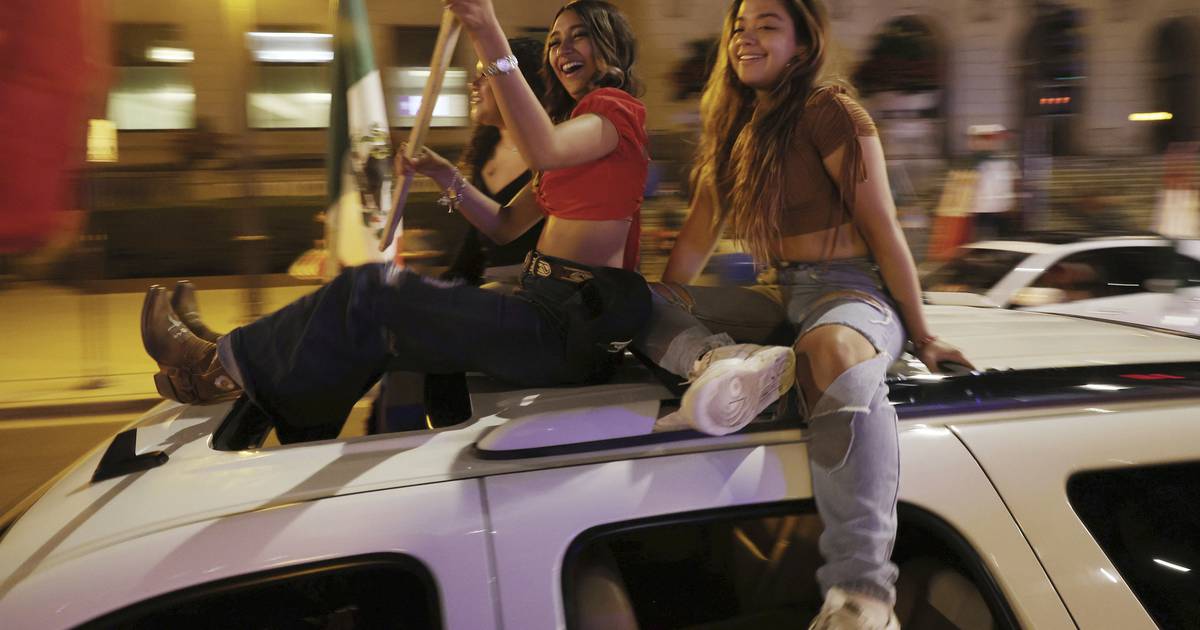 Tens of thousands of revelers and cars donning Mexican flags and colors took over Downtown into the early hours of Saturday in celebration of Mexican Independence Day.

Among the excited crowds enjoying themselves, at least two men were shot and others were robbed and carjacked downtown, police said.

Additionally, car caravans and drag racing created “total gridlock” in some places, causing some people fright and others delays in getting to work, said Mayor Lori Lightfoot at an afternoon news conference at the Harrison Park Field House, 1824 S Wood St., located next to the National Museum of Mexican Art.

“Stop sticks,” or tire deflation devices and street closures were planned for the rest of the weekend to diminish the problems the racin “drifting” created, officials said at the conference, which also included Chicago Police Superintendent David Brown and other officers.

Last night our cultural pride was on display, said Lightfoot. “Chicago is home to one of the largest Mexican communities in the United States and proudly so.”

Public safety was an issue Friday night, said Brown as well as “attacks on officers” including one brawl that involved someone throwing a frozen water bottle in the face of an officer, who had to be hospitalized, Brown said.

Reporters asked about the two shootings and carjacking.

“We do believe that both incidents were directly related to the caravans,” McDermott said when asked about the shootings.

Brown downplayed the attacks, including the carjacking.

“We don’t have information as of now, that the carjacking was related to car caravating at all,” Brown said.

Overall, said Brown, there was no violence.

“I wouldn’t want to conflate any of single kind of one-off incidents with this whole thing has been violent…that would be inaccurate.”

Lightoot echoed his statement, saying the celebrations were largely peaceful. But unfortunately some were engaged in “unsafe and reckless behavior,” Lightfoot said, adding those behaviors “diminished,” the event.

Lightfoot said she was here to encourage “everyone across our city to use common sense in celebrating Mexican Independence Day.”

Caravans and drag racing triggered traffic snarls that made it hard for some to get to work. “Some are just plain scared,” to be driving near the festivities, Lightfoot said.

Brown, who spoke of the “plan” for Saturday night, said “we are going to make adjustments,” based on the incidents that happened Friday night.

Brown, who urged safe celebrations, said this should be a time for everyone to have a “great time.”

Ambassador Reyna Torres Mendivil, consul general of Mexico in Chicago, called for people to celebrate their culture “like us Mexicans know how, respectfully.”

“We don’t want to, because of a few, hear people talk negatively about our community,” Torres Mendivil said. “Our community gives plenty of reasons for people to talk about us with pride of who our community members are, how hardworking they are and how we celebrate with enthusiasm and joy,”

Police Chief Brian McDermott addressed road closures for the rest of the weekend to avoid the “total gridlock” which happened in the city, especially in the Central District. “Stop sticks,” tire deflation devices were planned for use, he said.

There will not be a “total closure” of downtown, but they will occur intermittently, McDermott said.

McDermott, when asked by a reporter which “de-escalation” methods police would be using, said that he witnessed those methods “every minute” the officers were out there as people were “in their face yelling and screaming,” dancing on buses or flipping them the bird.

“We don’t rush in there with a heavy hand and start kicking people off the bus,” McDermott said.

Brown said the police department will be towing more vehicles and will tow cars retroactively if they are found illegally parked or drag racing.

“We will relentlessly follow up on these people that are drag racing in the streets,” Brown said. “We have hundreds of cameras across the city. We’re already identifying those vehicles.”

Those who are identified can be arrested and face fines of up to $10,000, Brown said.

Illinois State Police will be assisting with ramp closures, beginning at 5 p.m., they said. The closures will be set up “at various locations” into the city, ISP said. The closures are expected to remain in effect throughout the evening.

She told people to go display their flags and decorated cars with pride and respect and while following the law and instructions of city officials.

“I want to tell our community to feel proud to celebrate Mexico,” Torres Mendivil said. “It’s beautiful, truly beautiful, to see the city painted in green, white and red during these festivities.”

A 32-year-old man was involved in a fight with another man on the 100 block of South Wacker Drive at about 1:08 a.m. Saturday when a person in a red car fired shots and hit him in the back, police said. The man was taken to Northwestern Memorial Hospital, where he was listed in good condition.

In the 0 to 100 block of East Wacker Drive around 1:10 a.m., a 27-year-old man was walking on the sidewalk when a group of people started beating him and one assailant shot him in the head, police said.

That man was also taken to Northwestern Hospital in good condition.

The carjacking and robbery during continuing celebrations around 3:15 a.m. when a group of five people were in a stopped car on the 1400 block of South DuSable Jean Baptiste Point DuSable Lake Shore Drive, police said.

An armed person approached them and demanded that they get out of the car, police said. The robber took several necklaces from two of the people in the group and then took the SUV they were in, a 2011 Nissan Rogue with an Illinois license plate, DD47882. No one was physically injured.

Friday, the city’s Office of Emergency Management and Communications (OEMC) sent an alert warning of swelling traffic was expected downtown due to the holiday.

About 9 p.m. Friday, OEMC dispatchers could be heard speaking to police over the radio. One officer asked if there was supposed to be a city garbage truck blocking the ramps into the city. After one officer responded yes, the first officer said: “Well, it’s not working.”

Police reported no arrests as of early evening Saturday.