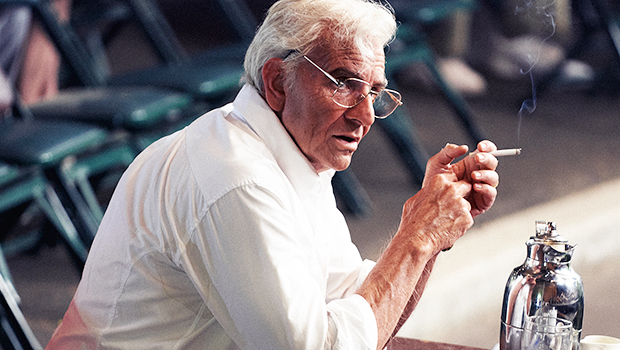 One of the most anticipated movies for next year is Maestro. The new film will be Bradley Cooper’s second directorial effort, and on the heels of his debut with A Star is Born, it’s sure to be a hit! The currently-unrated biopic is based on the life of famed composer Leonard Bernstein, and since Bradley received so many Oscar and Golden Globe nominations for his first movie, there’s certainly a lot of buzz for Maestro to be a serious awards season contender. Before it hits theaters, here’s everything that we at HollywoodLife know about the movie including the plot, cast, crew and more!

Where and When To Watch

While Bradley and company have been hard at work on the new movie, there’s still a lot of time before fans can check it out! The movie will be available on Netflix, but it probably won’t be out until at least autumn 2023. Bradley revealed that it likely wouldn’t be available until then in a June episode of the Smartless podcast. “It won’t come out until the fall of [2023], I think,” he said. Unfortunately, there’s no confirmed release date, but if it does drop in the fall, it will have plenty of time for viewers to check it out as many award-show-ready films premiere in the fall, and it may be a serious contender for the Oscars in March 2023.

Besides directing, Bradley will also play the starring role of Leonard Bernstein. The composer was one of the great musical icons of the 20th century. Born in Massachusetts in 1918, Leonard composed a number of beloved musical pieces throughout his life until his death at age 72 in 1990. He’s best well-known for writing the music for West Side Story, but he also composed three symphonies and many more songs.

Besides Bradley, Never Let Me Go actress Carey Mulligan will star alongside him as Leonard’s wife Felicia Montealegre. Leonard and the actress were married from 1951 until her death from lung cancer at age 56 in 1978. Magic Mike actor Matt Bomer was also reported to play Leonard’s lover in March 2022, via Variety. While details about Matt’s character are scarce, sources reportedly told the outlet that he’d be playing a musician that the composer had a short fling with.

Many other major celebrities have been cast as members of the Bernstein family. Sarah Silverman was reported to be joining the cast as Leonard’s younger sister Shirley in June 2022, per Deadline. Stranger Things actress Maya Hawke is set to play Leonard and Felicia’s daughter Jamie, while up-and-coming actor Sam Nivola, who recently starred in White Noise, will play her brother Alexander. It’s not currently known if there will be an actor playing Leonard’s other daughter Nina.

Who Is the Creative Team?

As mentioned above, Maestro will be Bradley’s second directorial effort. Besides serving as the director, Bradley will also be a producer along with three other major directors: Steven Spielberg, Martin Scorsese, and Todd Phillips. Bradley revealed that Steven had originally planned to direct, but he offered him the film after speaking with the Silver Linings Playbook star and seeing A Star is Born. Bradley opened up about wanting to direct and asking the legendary director for the opportunity in a January 2022 appearance on The Late Show. “[Spielberg] happened to know that I had this obsession with conducting,” he said, and he revealed what the director told him while watching his first movie: “You’re f**king directing Maestro.”

While a number of film icons have producer credits, Bradley co-wrote the script for the movie with Josh Singer. Josh is no stranger to historical biopics. He was also a writer for Spotlight and The Post, both of which he also produced.

While there’s so much to cover in Leonard Bernstein’s life, it’s impossible to fit it all in one picture, the movie is reportedly going to focus on his relationship with his wife and children, including two different engagements, and raising their children. “The complex love of Leonard and Felicia, from the time they met in 1946 at a party and continuing through two engagements, a 25 year marriage, and three children,” the plot description says on IMDb.

Given the time that the couple first met and when Felicia died, the movie will certainly give glimpses into the late composer’s work. Since West Side Story debuted in 1957, it seems likely that the movie will include his work on the Broadway musical. Some of Leonard’s other major works that will hopefully be portrayed in the movie include the score for On The Waterfront in 1954, as well as his symphonies “Chichester Psalms” (1965) and “Serenade After Plato’s ‘Symposium’” (1954). Until the trailer gets released, nothing can be known for sure which of the famed composer’s works will make the cut though!

The film has been a long time coming, with different directors attached at different points throughout the development, until Steven Spielberg gave the project to The Hangover star. Bradley announced that the movie would start filming in May 2022 during an “Actors On Actors” conversation in January of that year with Variety. The first photos of him in costume as the legendary composer were also released In May, showing his complete transformation into the famed musician. Photos of Bradley and Matt filming a kissing scene were released in June.

While much of Leonard’s major career events took place in New York, the movie was filmed both in the U.S. and Europe. Bradley explained a rundown of the schedule in the above-mentioned Smartless podcast. “We started shooting in Massachusetts, then New York, then East Hampton, then we take a break, and then we go to Italy for three weeks, and then we end in London,” he said. The movie is in post-production as of September 2022, per IMDb.