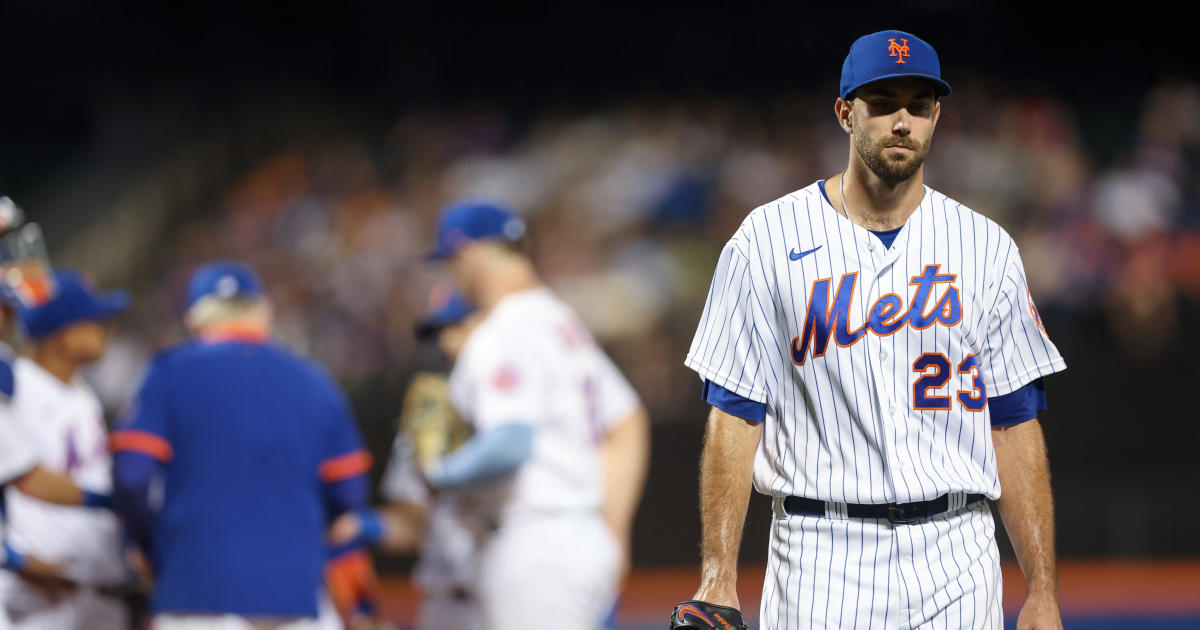 NEW YORK — David Peterson got only one out and the slumping New York Mets fell behind early in a 6-3 loss that completed a three-game sweep by the Chicago Cubs on Wednesday night.

The NL East leaders lost their fifth consecutive home game and dropped to 5-7 in a 16-game stretch against Washington, Pittsburgh, Miami and Chicago — all more than 20 games under .500 this season.

New York remained a half-game ahead of the Braves in the division race after they lost in San Francisco earlier. The Mets have held a share of first place for all but two days this season: April 11 and Sept. 9.

New York has dropped three straight overall for the second time this month and fourth time this year.

Peterson’s only out was a strikeout of Patrick Wisdom, and the left-hander allowed two-run doubles to Yan Gomes and P.J. Higgins. Trevor Williams permitted an RBI double to Michael Hermosillo and a run-scoring single to Nelson Velázquez in Chicago’s 25-minute opening inning.

Pete Alonso and Tomás Nido homered for the Mets, who scored six runs in the series and got swept for the fourth time this year. New York was also swept in a pair of two-game sets against AL-best Houston in June and last month against the Yankees in the Bronx.

Peterson (7-5) allowed five runs and two hits. In his last three starts against Chicago, Miami and Washington, he has given up 11 runs in 9 1/3 innings.

The Cubs won their third straight for the first time winning five in a row Aug. 16-20.

Chicago starter Drew Smyly (7-8) allowed two runs — one earned — and four hits in five innings. He struck out five and walked one.

Williams began warming up 13 minutes into the game and Gomes gave the Cubs a 2-0 lead with a double to the right field corner. Two pitches later, Higgins hit a two-run double down the right field line that just stayed fair, and Peterson was booed off the mound.

Hermosillo’s double to left pushed Chicago’s lead to 5-0, and the center fielder scored the sixth run on a single by Velázquez.

The Mets were within 6-3 when Alonso connected in the eighth, but Michael Rucker whiffed rookie Mark Vientos. Mark Leiter Jr. hit Jeff McNeil in the back with a pitch to open the ninth before getting his second save.

NEAR MISS IN CENTER

Hermosillo made a leaping catch in front of the warning track in center on Eduardo Escobar and nearly collided with right fielder Seiya Suzuki before hauling in the fly ball.

After Peterson’s short outing, Williams allowed one run and four hits in 4 1/3 innings. He struck out eight, including six straight.

Cubs: Suzuki was hit in the left hand in the ninth and stayed in the game after being checked out. … C Willson Contreras (sprained left ankle) worked out on the field and might be activated Friday. … CF Rafael Ortega will miss the rest of the season with a broken finger. Ortega exited Tuesday when he was hit in the finger by a pitch he bunted foul. … SS Nico Hoerner (triceps) took swings, played catch up to 90 feet, took grounders and could return Friday.

Mets: RHP Max Scherzer (left oblique irritation) struck out seven and threw 59 pitches in 3 2/3 innings during a rehab start with Triple-A Syracuse. He’s expected to come off the injured list early next week in Milwaukee. … RHP Tylor Megill (right shoulder strain) will get at least more rehab outing at Syracuse on Friday so he can pitch in multiple innings. … RHP Drew Smith (right lat strain) will make consecutive rehab appearances with Syracuse this weekend.