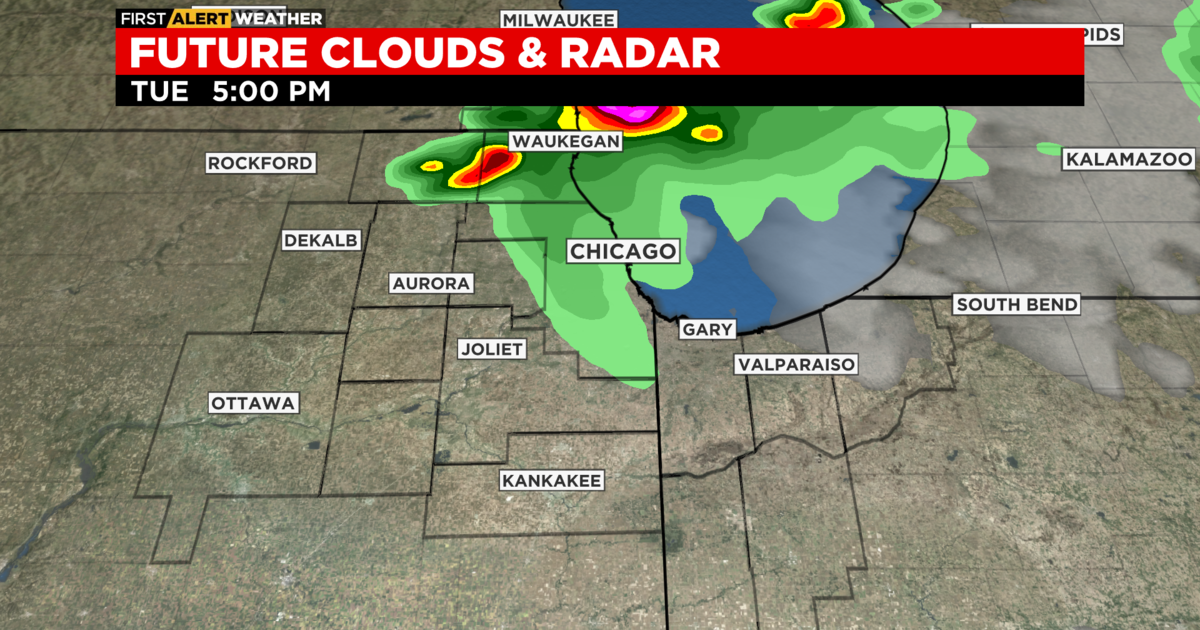 CHICAGO (CBS) — A round of severe storms were headed toward the Chicago area late Tuesday afternoon.

Two separate warnings were also in effect until 6:30 p.m. – one for southwest Lake, northeast DuPage, and northeast Cook counties, and the other for northeast Kane and northwest DuPage counties.

Warnings were also issued for McHenry and DeKalb counties, and earlier northeastern Winnebago and Boone and southeastern Rock County, Wisconsin.

The storms were bringing wind gusts up to 60 mph over Downers Grove as of just before 6:30 p.m. Winds of 60 to 65 mph were reported soon afterward near Midway International Airport.

There was concern that the system could turn tornadic. The storm did produce a funnel cloud in Kane County, CBS 2 Meteorologist Albert Ramon reported. However, no tornado warnings have been called.

Although widespread severe weather is not expected, storms producing damaging winds, large hail and isolated tornadoes will be possible.

CBS 2’s Kris Habermehl tweeted a photo of some turbulent clouds at the airfield in Schaumburg after Chopper 2 had to land due to the threat of severe weather.

The storm threat will decrease after 7 p.m., and the rest of the evening should be warm and dry, with lows in the 70s.

Earlier, storms in Wisconsin sent us an outflow boundary that is keeping a gusty northeast wind flow in place from the north shore to the WI line. Waves here are 3 to 5 feet with dangerous rip currents until sunset.

There was a large spread earlier in the afternoon. It was cool in Highland Park with 70 degrees., and 90 degrees in Bolingbrook. Feels like temps were around 100 degrees far southwest.

Cold front crosses at daybreak tomorrow. Not a huge rain chance with it, but a noticeable drop in temps.

Meteorologist Mary Kay Kleist can be seen on CBS News Chicago and weeknights on CBS2 News at 5 p.m.